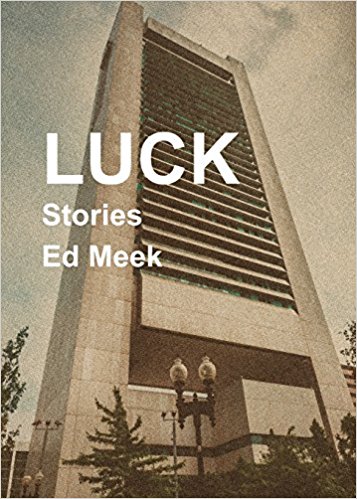 I don’t usually review non-historical fiction; but when I heard Ed Meek read from his new short story collection “Luck” at Porter Square Books in Cambridge, I knew it was something I wanted to write about.

Meek’s concise, elegant prose zooms in on the lives of Bostonians both at home and farther afield, and is set mainly in the 1970s, with a few stories set in more contemporary times. But the clear, easy-to-read style belies the thorny issues raised by the narratives that explore the fragility of modern relationships, and the drudgery and precariousness of existence, particularly, though not exclusively, in the turn-of-the-century urban landscape.

The collection features a wide range of protagonists, some of whom include a college professor whose life implodes due to an affair with a student (Kick-boxing with Ingrid); an expat couple caught in the middle of the Iranian revolution (The Fall of Iran); an older man in throes of a worsening dementia (Getting in Trouble), a small-town girl trying to navigate the pitfalls of a city life (No Experience Necessary); and a supporting cast of hustlers, drifters and petty criminals throughout.

What these characters share is a disillusionment with their failing marriages, bland relationships and shallow friendships, all of which results in violence, often, though not always, realized through domestic battery. The moment when the protagonist of A Rare Night Out has a fleeting thought of running his wife over with his car as she exits a restaurant after a tense dinner is as emotionally fraught as the scene in No Experience Necessary in which a man strikes his girlfriend in the face with a beer bottle.

Women are often the target of violence in these stories, victims of what can be described as a demasculinization of the urban male, for reasons of growing economic uncertainties that result in a lack of good jobs and few prospects for the future. That, in turn, engenders criminality, depression, as well as drug and alcohol abuse that suck individuals into cycles from which they are unable to extricate themselves (as in the case of Jack, an African-American slacker, who appears in both No Experience Necessary and Two-Fourteen). In telling moments in several stories, the protagonists, usually in a state of inebriation, look in a mirror hanging above the bar of whatever seedy establishment they have ended up at, and they are stupefied to find that they are unrecognizable even to themselves.

It is not all doom and gloom. The female protagonist of No Experience Necessary returns to her rural home to raise her baby with her family, and the unemployed family man in The Most Boring Town in America discovers that his relationship with his wife still has a spark. But, for most of Meek’s characters, life’s hard lessons have at best a moderate value – one gets the sense that not much will improve, that the aimlessness will go on.

For all that, the collection makes an absorbing, not to mention stylistically interesting, reading. One of its accomplishments lies in the author’s choice to experiment with different voices (from an educated, if casual, style of a frat boy in Narcissus, to inner-city slang of blue-collar workers in Two-Fourteen); several perspectives (including a female narrator in Body Surfing); and both past and present tenses. This enhances the diversity of represented experiences, while serving to underline that, ultimately, they are all universal.