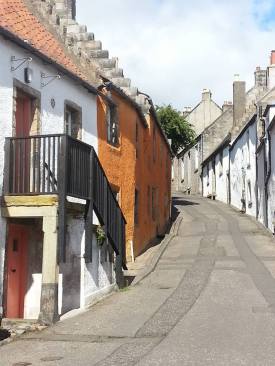 As part of the Historical Novel Society 2018 conference in Glasgow I took a trip with several other attendees to the Royal Burgh of Culross, a few miles northeast of the city.

It was a fitting visit for a group of historical fiction writers for two reasons. One is of course that the little town as an interesting history, but it is also the site of some of the settings for the hit Starz series The Outlander based on Diana Gabaldon’s bestselling time-travel historical saga.

The town was made a royal burgh by King James VI in 1588, which gave it rights to trade internationally. That was a beginning of a streak of prosperity that centered around coal mining and sea salt production in the early 17th century.

The historical focal point of the village of about 400 is a merchant house, affectionately known as the ‘Palace’. It was built by between 1577-1611 and originally owned by George Bruce, who made his fortune in the coal and salt production and was a descendant of the Kings of Scotland. King James visited the Palace on at least one occasion, and for a long time it was believed that he had slept in one of the chambers, but historians now believe that it is more likely he would have stayed at the local Cistercian abbey. 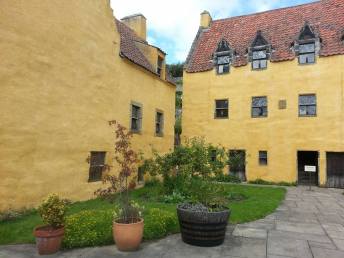 The ‘Palace’ is not as large as some of the historic mansions that can be found around Scotland, but it is quite beautiful with ornate dormer windows, crow stepped gables, and pan tiled roofs.

It is no wonder that The Outlander production crew found it to be the perfect place to film several scenes there. Our guide relished telling us that the scene where Claire pulls the tooth of one of the soldiers was filmed in one of the Palace’s sitting rooms.

The little town that surrounds the house is so quaint and well-preserved from the era that it served as a filming location for several other movies and shows as well, including Kidnapped, The Little Vampire, and Captain America: The First Avenger.

2 thoughts on “Visit to Culross, Scotland where The Outlander series was filmed”