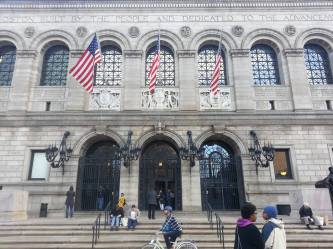 This past weekend, my favorite Boston event took place in Copley Square, namely the 10th annual Boston Book Festival. It brought together authors, writers, speakers, journalists, and readers for a celebration of new books in a variety of genres, from adult and children’s fiction to memoir to public affairs.

Each year, it features debut authors as well as established novelists and public figures that are household names. In 2018, two of the most prominent ones were historian and Pulitzer Prize-winning author Doris Kearns Goodwin, author of Leadership, a new book on presidential temperaments, and John Kerry, former secretary of state, who published a memoir Every Day is Extra. The Fiction Keynote was delivered by Tayari Jones, author of An American Marriage.

There were dozens of events, talks, and panels and it was impossible for me to see  everything that I was interested in. So I chose two reading sessions and one geared specifically for writers and focusing on craft.

The reading session titled Reimagining History featured Katherine Arden, author of Winternight trilogy that blends history and myth, using one to inform the other to form a picture of medieval Russia that goes beyond stereotypes. Her fellow panelist was P. Djeli Clark who read from The Black God’s Drums, an alternate history novella set in 1880s New Orleans in a world where the civil war is still going on. The third author was Jordy Rosenberg whose Confessions of the Fox is a genderqueer reimagining of the story of the eighteenth-century outlaw Jack Sheppard as well as a satire on modern-day academia. 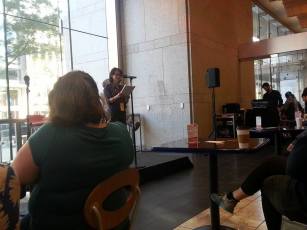 During the panel titled Secrets and Suspense, four female authors read from their latest novels. Karen Day’s I’ll Stay deals with secrets held in families and the fallout that they cause. Debra Jo Immergut, author of The Captives, talked about the importance of the premise being packed with tension “like a wound-up toy you put down and it starts to spin.” The other authors included Andrea Klein (Eden) and Meg Little Reilly whose novel Everything That Follows focuses on good people making bad but defensible choices.

The discussion that followed brought up some interesting questions. One that stuck with me as an author of a historical thriller (in progress) was the issue of what information to withhold until later and what is crucial to propelling the story forward from the start. One of the panelists mentioned that using 1st person narration can be helpful in that way as it offers a natural limitation of the POV. It is therefore easy to leave info out in a natural, non-heavy-handed way. That was an insightful observation that made me excited as my WIP Silent Water (more on that soon!) is narrated by the main character.

The final session I attended was called Reading like a Writer: Setting. Each of the three authors read from their novels, then discussed what made them choose that particular place for their story and the challenges that it posed. Robin MacArthur read from Heart Spring Mountain, a contemporary novel set in rural Vermont. Laura van den Berg read from The Third Hotel, set in Omaha, Nebraska.

My favorite of the three was Bound for Gold by William Martin, a story of a group of sailors arriving in 1849 San Francisco during the gold rush. His excerpt featured a Dickensian POV where the scene starts with a swooping, birds-eye view of the harbor and the shanty town that was San Francisco, then comes in closer to focus on details. Martin also stressed the importance of having the courage to break the rules. In one sentence, he broke “the rule of three” by listing four elements because he believed that it worked better with the cadence of the sentence. See for yourself:

“Amongst the larger vessels swam schools of longboats, lighters, cutters, and rafts, carrying cargo and men across the muddy shallows or up to the few wharves that ran out from solid ground.”

Works for me. But then, I love breaking rules.