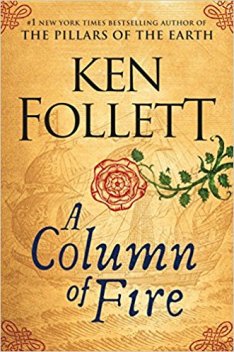 This is a review I have wanted to post for months, but this book is MASSIVE at over 900 pages. Ken Follett strikes again!

Of course, Ken Follett needs no introduction. After the runaway success of Pillars of the Earth and World Without End comes the third part in the Kingsbridge series. A Column of Fire, true to form,  delivers an epic tale that effortlessly weaves several storylines following the lives of the descendants of the previous novels’ protagonists. It takes place  from 1558 to 1620. History fans know this period as the last few turbulent decades of the Tudor era, marked by religious and dynastic conflicts.

The novel opens in the final year of the reign of Queen Mary I. Kingsbridge, like the rest of England, is being torn apart by religious strife. The town’s secular and religious government is dominated by Catholics – Sir Reginald Fitzgerald, the mayor, and Bishop Julian, both greedy and vengeful. Their targets are the small and secretive Protestant community and Kingsbridge foremost merchant family, the Willards.

After the leader of the Protestants is burned at the stake and Ned Willard’s mother Alice is bankrupted by Sir Reginald’s backhanded business dealings, Ned sets out to Hatfield to work towards securing Princess Elizabeth’s ascension to the throne. He is motivated primarily by the desire to break Sir Reginald’s and Bishop Julian’s stranglehold on his town, and to end religious prosecution across the kingdom.

When Elizabeth becomes queen England takes a Protestant turn, but danger of a revolt is never far from her mind. Concerned about an invasion from the Catholic king of Spain, and unsettled by religious conflicts ravaging France, she must also fend off a dynastic challenge from Mary Queen of Scots. Helping the queen navigate these treacherous waters and keep her crown is her legendary spymaster Sir Francis Walsingham and his ambitious assistant . . . Ned Willard.

The plotlines are too many to summarize in this short review, but it is worth emphasizing Follett’s effort to put strong women at the center of several of them. Two female characters in particular are deeply involved in espionage efforts that affect some of history’s most memorable events, including St. Bartholomew’s Day massacre of Protestants in Paris in 1572.

As a storyteller, Follett never disappoints. Despite it length, the narrative is fast-paced, well-researched, and the reader is instantly immersed in the fascinating and dangerous world of Renaissance-era passions and political intrigue. I am eagerly looking forward to the next installment of the series.

*****
If you enjoy medieval historical fiction, check out The Greenest Branch, my novel based on the life of Hildegard of Bingen, Germany’s first female physician. It is FREE to read on Kindle Unlimited, and available in ebook and paperback on Amazon US, Amazon UK, and several other Amazon marketplaces.

One thought on “A Column of Fire by Ken Follett”