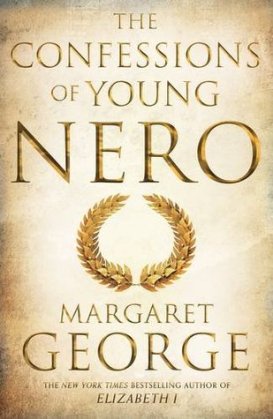 Writing a novel based on the life of a real historical figure, and doing so through the first-person narrative is fraught with risks. I know that, because I wrote my Hildegard of Bingen series in the same way. The challenges include getting the voice right, making it believable, and doing justice to the character as well as everyone else who interacts with him or her.

In The Confessions of Young Nero, Margaret George was presented with the additional difficulty of dealing with a protagonist with a truly bad reputation. Those with even a cursory knowledge of ancient history will know Nero as power-hungry, volatile, cruel, and perhaps even insane. He was implicated in the death of his mother Agrippina, his first wife Octavia, his second wife Poppaea, not to mention members of the fledgling Christian religion who were among the targets of his persecution.

Yet the novel strikes a different tone. By having Nero narrate his story – from his early life as an imperial kin to reaching the height of power in the ancient world – the author helps us understand the forces that had shaped someone of a fundamentally good nature into the infamous tyrant that we know from history.

In Margaret George’s (and Nero’s) telling, the future emperor is a sensitive, precocious, and lonely child, who grows up surrounded by a ruthless family whose members reach for any method – including poison – to clear their path to the throne. As a result, the young boy never feels safe, even within the confines of his own home.

After his mother Agrippina murders her husband Crispus because “he had outlived his usefulness,” the teenage Nero realizes that “Here was the horrible truth: I came from a family of murderers. Caligula had tried to kill me. Messalina had tried to kill me. It was rumored that Caligula had murdered Tiberius, smothered him with a pillow […] This blood of murderers was coursing through me. Was a murderer inside me waiting to get out?”

As it turns out, there was. After orchestrating the poisoning of his stepbrother (and rival) Britannicus, the guilt-ridden Nero reflects, “It was over. I had prevailed. But now I had joined their ranks – the ranks of imperial murderers, stretching in a long line behind me.”

Throughout the book, I struggled with this idea of Nero as a victim. At times, I was uncomfortable with what might be seen as an attempt at softening or even whitewashing the image of a man responsible for the suffering and death and many of his contemporaries. But in the end I could not help but feel sorry for him. Perhaps that’s because it is a well-researched novel that does not shy away from depicting some of the most despicable acts of his reign, even as it tries to explain his motivations.

The pacing of the story is not always even, with lengthy sections describing Roman feasts, celebrations, and sports games. Overall, however, it is an interesting, intimate account with a good dose of psychological insight that may be absent from historical records and academic works on the subject.

*****
If you enjoy historical fiction, check out The Greenest Branch, my novel based on the life of Hildegard of Bingen, Germany’s first female physician. It is FREE to read on Kindle Unlimited, and available in ebook and paperback on Amazon US, Amazon UK, and several other Amazon marketplaces.