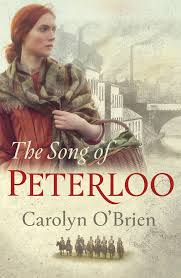 The massacre of mill workers that occurred on 16 August 1819 in Manchester, England – and resulted in 18 deaths and hundreds of injuries – is not one of those immediately recognizable, watershed moments in history. To be honest I had never heard of it until I read The Song of Peterloo, and I have been a history buff since I was a teenager. But thanks to Carolyn O’Brien’s upcoming novel, my knowledge of the timing and extent of the workers’ rights movement is much greater.

In the novel, we follow the story of Nancy Kay, a young single mother who struggles to make the ends meet as one of the thousands of Manchester’s underpaid, half-starving mill workers. Nancy also has a dream: she wants to prevent her young and sensitive son Walter from having to follow in her footsteps. The chance to better her circumstances appears when a new owner of the mill organizes reading classes for the workers’ children and hires Nancy as a teacher’s assistant.

But as Nancy begins to fulfill a life-long desire to learn to read, dark clouds gather over Manchester and all of Northern England. The economic situation has been on the decline, and the meager wages cannot keep up with the rising price of bread. Workers and their advocates have been organizing to demand better pay and working conditions, and soon calls for parliamentary reform and suffrage are added to the mix.

By the summer, the situation is a tinderbox, with factory owners and city magistrates increasingly worried about the movement’s popularity. Then Manchester Patriotic Union sets a day for a workers’ demonstration which would be addressed by Henry Hunt, a well-known agitator and radical. Nancy, whose political sensibilities have been sharpened by hardship and the growing ambition to seek a better life, decides to participate. But she has no idea that the peaceful event will take a dark turn that will forever alter the course of her and her sons’ life.

Written with a Dickensian sensibility, The Song of Peterloo is a poignant tale of the power of the human spirit to soar above the bonds of oppression. It is also a timely reminder that the freedoms we enjoy today have been won at great cost and should never be taken for granted. Carolyn O’Brien has written a fitting tribute to the men and women of Manchester who stood up for equality, freedom, and dignity in the year 1819. I highly recommend it as part of remembering the 200th anniversary of the Peterloo Massacre.

*****
If you enjoy historical fiction, check out The Greenest Branch, my novel based on the life of Hildegard of Bingen, Germany’s first female physician. It is FREE to read on Kindle Unlimited, and available in ebook and paperback on Amazon US, Amazon UK, and several other Amazon marketplaces.