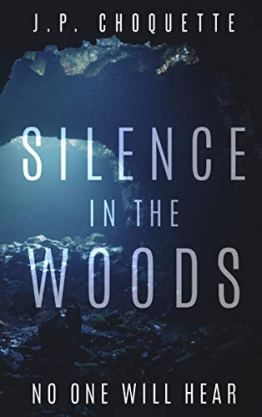 As a new Vermonter, I’m fascinated by local folktales. None are more popular here than those telling of the possible existence of Bigfoot, a hairy, ape-like creature that is said to dwell in the wilderness.

J.P. Choquette’s Silence In the Woods is the first in the Monsters in the Green Mountains series that centers around supernatural and unexplainable phenomena taking place in the remote parts of Vermont. It also happens to be a historical novel set in the late summer and fall of 1917.

On a warm September day, two couples, the Rogerses and the Warnings, set out on a hike up Shiny Creek Trail, where people have gone missing for decades. Paul Rogers is a photojournalist who dreams of finding evidence of Bigfoot and writing an article that would garner the attention of National Geographic and take his career to the next level.

What starts as a pleasant excursion among nature turns more ominous by degrees as the hikers move farther into the woods. As darkness approaches, they are forced to find shelter from an unexpected storm in a remote cave. Before the night is over, the group are attacked by a mysterious presence that seems to materialize out of dark fog. Fear, isolation, and the unknown gradually cause grudges that festered to come to the surface. The group scatters, and Paul Rogers makes it out of the woods, only to end up in a mental hospital in northern Vermont.

Two months later, and still struggling to remember the details of his ordeal, Paul escapes the institution and returns to Shiny Creek Trail to find his wife and friends who are still missing. He also wants to prove that what he saw in the woods was not a product of a diseased mind, but real evil waiting for its next victim. Will Paul find Jane, Allan, and Deirdre, and get the answers he is hoping for?

******
If you like historical mysteries, you may enjoy Silent Water, a Jagiellon Mystery Book 1, set at the 16th century royal court in Cracow. It’s available in ebook and paperback on Amazon and FREE to read on Kindle Unlimited.