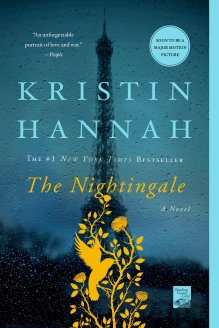 Kristin Hannah’s novel The Nightingale traces the fate of two French sisters, Vianne and Isabelle, whose complicated relationship is further tested when the Nazis invade their country in the spring of 1940.

The story starts when Vianne’s husband, Antoine, joins the army to fight the enemy, and Vianne settles into a life that’s increasingly full of privations, but reasonably quiet in their small town of Carriveau. Meanwhile the headstrong, independent Isabelle wastes no time in joining the Resistance, and in due course she is smuggling downed British airmen across the Pyrenees into the safety of Spain.

But the war’s reality finally arrives in Carriveau as the town’s Jews begin to be rounded up and deported, and a German officer is billeted in Vianne house. Soon, Vianne realizes that sitting on the sidelines may not be the best course of action if she wants to ensure her own survival and that of her loved ones. But can she live up to the challenges that have life and death consequences, and will she find Isabelle, whose anti-Nazi activities lead her to disappear into the maw of German concentration camps?

The Nightingale is well-written and researched. While it doesn’t necessarily offer a new perspective on World War II, it is likely to satisfy those interested in the genre and the period. And the story’s focus on female characters and the way the war impacted them specifically is an added bonus.

******
If you like historical mysteries, you may enjoy Silent Water, a Jagiellon Mystery Book 1, set at the 16th century royal court in Cracow. It’s available in ebook and paperback on Amazon and FREE to read on Kindle Unlimited.