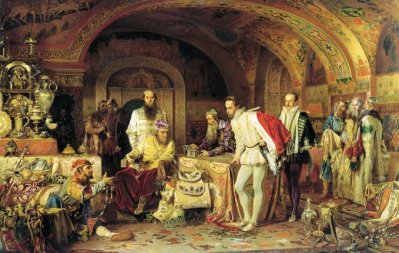 So close to the Arctic, dawn flushed the skies with pink despite the early hour. A blessed silence descended as the monks finished yet another round of prayers, chanted in Slavonic to the accompaniment of bells, and returned to their beds.

In his guest cell Henryk Mazur abandoned his efforts to seek comfort in dreams. The monastic rhythm of services disturbed his sleep. Sighing, he rose from his straw pallet and reached for a pair of wooden crutches the infirmarian had fashioned for him to help his twisted ankle heal. Thanks to these crutches and Brother Efrem’s pungent poultices, the sharp, throbbing pain had turned into nothing more than a discomfort. A week earlier, Henryk and his fellow Hansa merchants had arrived at Nyonoksa after a tedious journey from Poland. In his excitement he’d leaped from his horse without looking, an ill-timed move that required him to stay at the monastery to recuperate while his companions continued on to the fair at Kolmogory.

No matter. Another day or two, and his right leg would support his weight once more. Then he too would leave for Kolmogory, where he planned to place an order for marten fur before heading south to Moscow to ask his old friend Pavel for his sister’s hand in marriage. Whenever he thought of his future bride, the discomfort in his ankle diminished.

For now, though, he should nurture his injury. Armpits resting on the crutches, Henryk limped to the window of his cell to watch the sunrise. The view opened onto the vast, silver-gray expanse of the White Sea, flat and calm, mirroring the pearly sky as far as the eye could see. The red, heatless disk of the sun rose above the horizon, illuminating a landscape lightly whispering, solitary and primeval, the only sign of life a flock of seagulls wheeling in the air, their shrieks caught and borne away by the wind. The breeze picked up the aroma of roses opening to greet the dawn and wildflowers clustered thick as a blanket, drenching the air around the monastery with their scent. Henryk loved that view on a clear morning, letting himself imagine for a short moment—before the monastery and the village awoke with the usual sounds of industry—that he was alone in the world.

Across the watery expanse, he saw a ship sailing toward the wharf at Nyonoksa. A real ship. Not a shabby fishermen’s boat or whaler, not a crude one- or two-man log vessel like the ones the Lapps used, not even a rowboat like those in which the monks crossed back and forth to the Solovetsky Islands as if the treacherous waters were as serene as they looked.

No, this ship was comparable in size to those that docked in Antwerp, Amsterdam, or Danzig, where Henryk lived as one of the Hanseatic League’s trade representatives.

She was foreign, obviously, for Russia had no seagoing vessels. Spanish? Dutch? Few nations had the capability to reach this edge of the world through a sea that froze solid for half the year. From this distance, the galleon’s long deck seemed empty. The mouths of cannons protruded from openings along the side below rows of small, round windows. Three masts rose above the deck, their sails billowing as they caught the cool morning breeze, their tops flying pennants of various colors. But it was the flag that fluttered from the tallest of these that caused Henryk’s heart to skip a beat.

The red arms of Saint George’s Cross splayed against a white background. The colors of England.

The vessel did not look military, although with the English—a nation of pirates and privateers—such distinctions meant little. But what was there to pillage on this remote shore, except a few ancient monasteries and villages whose greatest treasures were salted fish stores and fields of barley ripening on the flatlands surrounding the mouth of the Dvina?

A trading ship, most likely. Yet that was hardly better news, for, as the continental merchants liked to say, wherever the English went, trouble followed.

Stay tuned for publication information and if you’d like to read more from the authors, please visit P.K. Adams and C.P. Lesley Amazon pages.