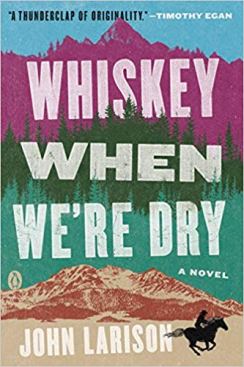 An absorbing and fast-paced western, Whiskey When We’re Dry begins in the spring 1885 when seventeen-year-old Jessilyn Harney leaves her homestead and sets out across the mountains in search of her outlaw brother Noah.

Alone after her father’s death, Jessilyn decides that the only way to keep starvation and rapacious neighbors at bay is to shut up the family cattle farm and head west to bring Noah home. However, in order to be able travel by herself, she must dress as a man. Secretly, she had been practicing with her father’s pistols for years, and she’s a very good shot. Still, the journey is full of danger, from outlaws to hunger to lack of money.

When she reaches the provincial town of Pearlsville, her talent with guns wins her several lucrative bets and a job as a guardsman with the governor. The latter, as it happens, is also searching for Noah Harney, although for reasons motivated by a personal vendetta.

For Jesse, this is only a temporary situation until she can get a lead on her brother’s whereabouts. For a while it seems that her search is going nowhere. Then an unexpected event on the eve of the governor’s daughter’s wedding upends Jesse’s plans and leads her to reunite with her brother. But as she finds her family again, she becomes an outlaw herself with a price of her own on her head.

Whiskey When We’re Dry revisits a time and place in American history that’s imbued with numerous myths and legends. But while it pays tribute to the raw beauty of the landscape and the determination and grit of those who rebuilt the nation after the Civil War, it also lays bare the unsavory aspects of that era, including poverty, racism, and misogyny.

What the novel does in an effective and thought-provoking way is to suggest that there were many women like Jesse. It leaves us with the tantalizing question–how many of the feats we remember from the Wild West were actually accomplished by those who wore pants only as a disguise?

If you enjoy strong female characters in historical fiction, check out my novel The Greenest Branch, based on the life of Hildegard of Bingen, Germany’s first female physician. It is out now in ebook and paperback on Amazon US, Amazon UK, and several other Amazon marketplaces. It’s also FREE on Kindle Unlimited.